Where are you in your writing journey? Are you NaNoing? Writing? Querying? On sub to publishers? In the midst of revisions? Taking time to read and improve your craft? Nurturing the seed of an amazing idea that’s taking root in your imagination?

Whichever of those things you are doing, or if you’re in a completely different place all together, I would like to take a minute to talk about something a lot of people would rather avoid. 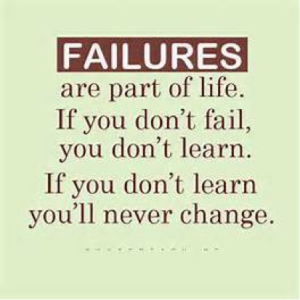 No one likes to experience it, and a lot of us hold back on our dreams to shelter ourselves. But you know what? I’m a huge advocate for failing. I say let’s fail. Let’s fail BIG TIME.

Let me tell you a quick story.

I’ve just come off of a huge failure (or at least the spice of one that will flavor my success someday).

I am a 2016 PitchWars mentee. For the last two months, I have been working tirelessly with my mentor, Jenna Lehne, on my middle grade manuscript. We revised. Then we went through and did it again. And again. I am still impressed by and grateful for Jenna for how many times she’s read that manuscript and I know she would still offer to do it again. And again.

So, you get the picture. It was a lot of work. And here’s something funny. The first week of our partnership, I looked up her mentee from last year. Wendy Parris had an amazing 13 requests and is now agented. What?! How was I going to compete with that? I was so scared that after a dream mentee like that, I was going to be a huge let down for Jenna. 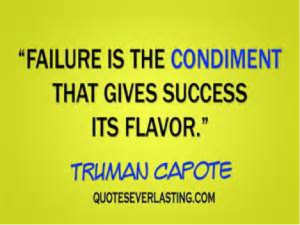 I reached out to Jenna and told her how I felt. She reassured me that everything would be fine. We’d work our butts off and I’d get tons of requests and a happy ending… whether it be from the agent round or this ms …. Or querying or another ms. She was in it for the long haul. But I wouldn’t ever know if I didn’t try.

And friends, I am so glad we got that out of the way at the beginning because when the first day of agent round came for middle grade manuscripts, I sat and refreshed my page a zillion times … and didn’t get even one request.

Yes, I am in the Zero Request Club (ZRC). The thing mentees fear but secretly think they won’t be in because, come one, we’ll at least get one request, right? We’ve worked so hard for months, there’s gotta be one agent who will recognize that and comment on our posts.

Truthfully, that day was TOUGH. The emotions from the last two months all came down on me at once, added to that the feelings of invisibility … or worse, inferiority, and I was in a dark place.

Anyone who has experienced failure knows how it feels. It is a tsunami wave, capable of knocking you off your feet. It is an eighteen-wheeler truck, flattening you onto the pavement. It is Jupiter-like gravity, crushing you to pieces. Oh, the weight of failure. It is too heavy to bear.

Alone, that is. When you take on your failure all by yourself, it has the power to stop you from accomplishing everything.

I’ve queried a manuscript before. I didn’t tell anyone. I sent off those queries and as the rejections came, I carried them in private. They burrowed in my heart, injecting me with darkness. On the surface, my body worked like it was supposed to and I went about my daily routines, but inside I was a jumble of misery and self-doubt. And the weight of it was one of the heaviest burdens I’ve tried to bear.

With this PitchWars failure, it was different. At first, I fell into my old habits. I went on a hike with my husband, trying to talk to him about the kids and what was going on that weekend, but after a few hours, I broke down in tears. I told him I didn’t have any requests and he comforted me. He said, the day is still young, don’t give up yet.

Well, the day grew old and still no comments came. My husband was so supportive, but I still wanted to hide in my failure by myself. I considered taking PitchWars mentee off my bio. I even thought about messaging Brenda to just take my entry down. This was all too embarrassing.

And my mentor? I didn’t talk to her for a while because it was all too much. Then I answered her when she asked how I was doing and I said, we talked about this! This is my worst PW fear coming true! I don’t even know if I can query this. I feel so disappointing.

And the gem that she is, she lifted me up. She let me cry, but then she helped me wipe away my tears. She reminded me we worked so hard for months and we weren’t going to throw it away because maybe my pitch, for whatever reason, wasn’t working like we’d hoped.

Then, you guys, amazing things happened.

SO MANY people started reaching out to me. Mentors. Mentees. Writers. Friends.

All sharing stories about how they were ZRC or knew someone who was ZRC and everything turned out fine. Or how even those with tons of requests still had to send those queries in. Or how sometimes you have to try a million times to get that one thing you’re reaching for, but you do it anyway.

And I was getting dozens of tweets and messages telling me they loved my manuscript. They loved me. And that it felt like I was failing, but no one thought of me as a failure.

Instead of falling down the dark hole of failure, I had hundreds of hands forming a net to catch me until I could stand on my own two feet again.

So I guess what I’m saying is, don’t be afraid to fail. Take that leap into your dreams. Move closer to accomplishing your goals. Just don’t try to do it alone.

I thought it would make the failure worse to add embarrassment on top of it, but really, it wasn’t an issue. I just had a lot of people salving the bruises instead of me, all alone, poking painfully at them.

Find yourself a group of people, whether it’s 2 or 3 close friends, or hundreds in a contest with you, and make yourself a community. Cheer them on in each failure and success, and they will do the same for you.

And you will find that together, we really can do anything we put our minds to.

In the spirit of trying new things that scare us, one of my editing friends and I have decided to launch a new editorial service: www.writeon-editing.com and @writeon_editing

I’d like to give away one three chapter detailed line edit to a commenter on this blog. Just comment on something you failed at that made you a better person, and you’ll be entered to win.

Tara Creel is a Utah-native-turned-California-girl and mother of four boys. She edits for Month9Books and writeon-ediitng.com and she blogs at taracreelbooks.wordpress.com. You can find her on Twitter: @Tara_Creel

19 thoughts on “Guest Post: What do you do with Failure?”