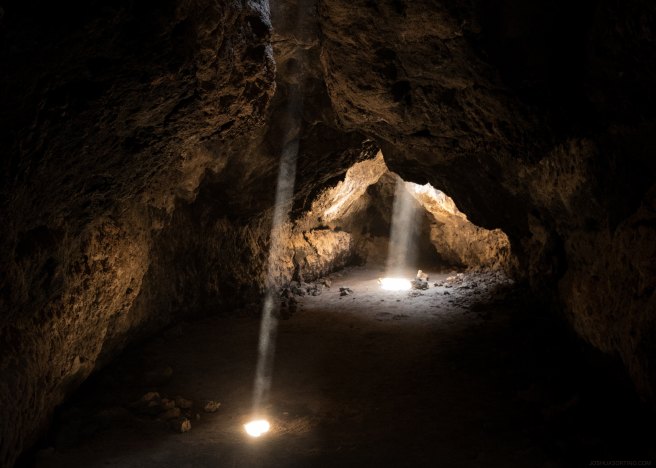 It was a small cave. Good thing I was small too. Now, if I could only get inside without anyone noticing…

Finish this prompt in 500 words or less. Post your prompt in the comments or email it to us!

Photo by Joshua Sortino on Unsplash

Pen Friends ~ Here is Part Two of the Dual POV Prompt Reply: This is my world… Enjoy the stories! Thanks to all who participated! 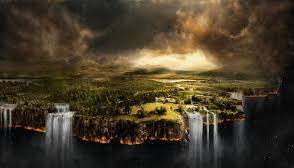 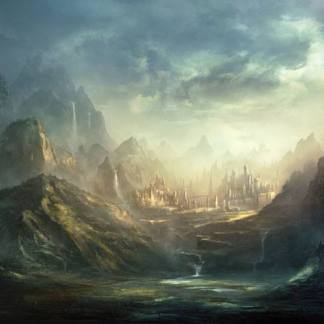 This is my world. It’s beautiful here, but too quiet now. I hate all the stillness. There’s no one to talk to and I think too much. I can’t help but remember why it’s so quiet here. I don’t want to remember how they all died, but I do–silent blood paints the walls of the palace.

This is my world. Prince Ferris sighed, gazed out the stained glass windows of the school spire, and wished for the umpteenth time that he was the one out on the spines of the Rhadrize instead of here memorizing history and lists of policy. It wasn’t fair that she, (in his better moments he referred to her as Kat—but today, stuck inside when the spring sun beckoned—was not one of his better moments) Master Philomius lectured on. Sneezing briefly ever so often when dust from the tomes and scrolls wafted up into his beak of a proboscis.

Ferris let his thoughts wonder. Up the twisting winding paths, past fern growth and pines out into the thin, clear air of the top of the spine. From the window the mountains were a range of blue and purple hues. Up close they pulsed in a variety of grey, greens, browns, almost every shade imaginable.

And he was stuck in here. He bet he could find what she was looking for. In fact, what if they traded places. She could study boring politics and he could go hunt for that treasure. She would be the one to rule Mid’Arch anyway.

“Prince Ferris. PRINCE Ferris!” Master Philomius’ voice was considerably louder the second time and it jerked Ferris back into the library.

This is my world, and I must save it. I awoke this morning knowing I must meet her, as the Seer predicted. But I fought my future. I helped mother prepare bread for supper. I helped Alana with her washing, ignoring the other boys who laughed at me for doing a womanly task. I wandered, not knowing where I went but knowing I didn’t want to end up here, at the Grand Falls.

“What are you looking at?” I say to her, not knowing or caring if she’d understand.

This is my world…I thought as I grinned up at the wisps of clouds, lit up by the moons. The iridescent glow gleamed green as I raced across the still wet grass and under the low hanging branches, only skidding to a stop at the edge of the river. Pebbles scattered like diamonds at my feet and tinkled into the glassy water.

I glanced back behind me with a mischievous grin.

My hands broke into the surface of the water until I held a firm grip on a vine of kelp. With a whoop, I threw myself into the river and let the current carry me speeding forward toward the edge.

This was always my favorite part, the feeling of being swallowed by nothingness, the freedom of flying through the air. I tipped over the brink of the waterfall and plunged into the empty abandon of space.

Here the rules of gravity were broken, for only the water would spin back and travel against the underside of the earth. Everything else: fallen leaves, loose pebbles, and perhaps a wayward wild child like me, dropped into the darkness. Most were never seen again.

But, just as the gust of cold air gripped at my lungs, its frozen fingers trying to claim me, the rope of river kelp bounced me back to reality.

I shook the spray of water from my face as I settled back onto the riverbank and held the rope out to him. 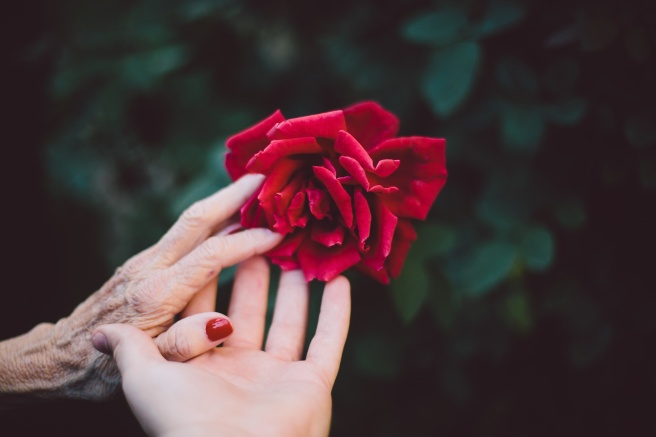 Finally, my whole being seemed to say, I have found it. Brilliant red, unfolding triumphant, it bloomed only inches away.

I knew the consequences– all would be grave and gorgeous and irrevocable– but I was compelled. All the distance I had crossed and now to have my hand hovering breaths away from it…

Eyes tied to the rose, I could not stop. My fingers tingled as they reached out for the bold petals…

Stories got passed down, one way or another, about the days when the city used to be full of sunshine and warmth, instead of dark clouds and snow. If you got overheard talking about the myths, though, you’d be knocked soundly on the head, and told to stop dreaming…

They were all there, ringed around the table and chatting between mouthfuls of mashed potatoes and turkey, all smiling and nodding, but I knew it was there hovering just beneath the surface. One word and everything would shatter…

What is the word? (And who are the people, for that matter)? 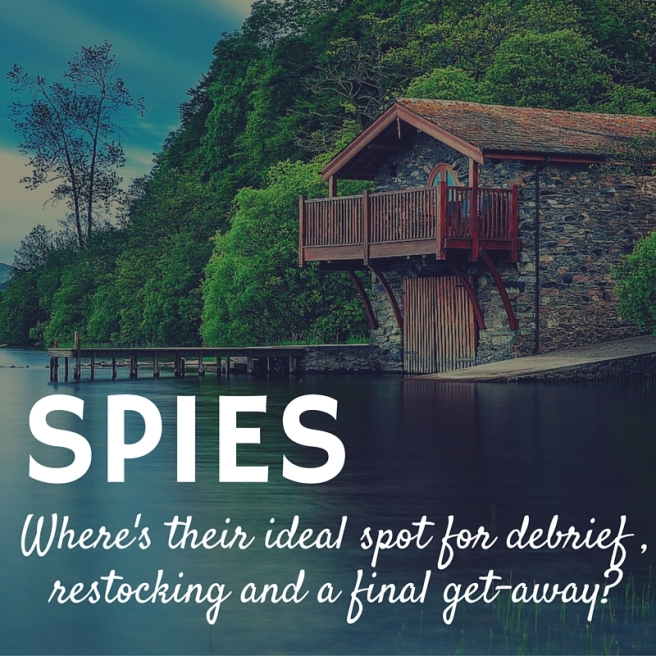 The mountains were green, thick, and peaceful. It was hard to believe that danger was not far from us. We can’t stay here anymore. I dipped my hand into the water–blue, clear, and icy-cold. The water had kept us alive; it brought our supplies, and it would carry us toward our mission tonight…

I no longer feel my fingers, but the worry I have over deadly frostbite fades as I stare up at the lights in the sky…

Give us your best Alaskan escape Prompt in 500 words or less. We will share our favorite story with our readers.

Email your prompt to: thespinningpen@gmail.com 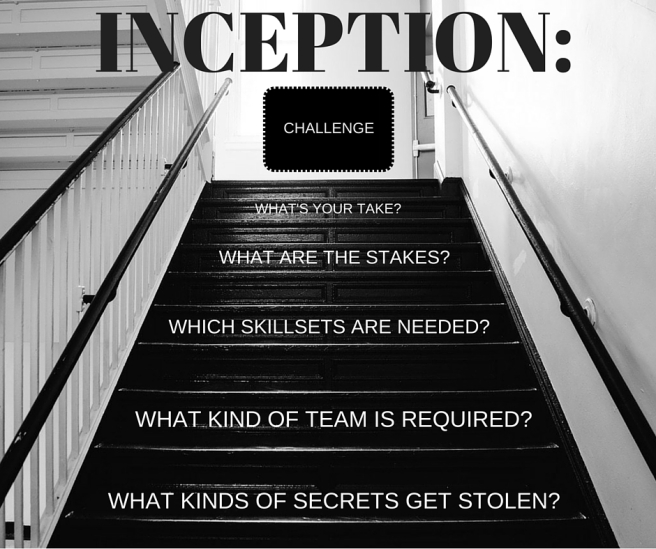 Give us your best Inception Prompt in 500 words or less. We will share our favorite story with our readers.

Email your prompt to: thespinningpen@gmail.com

When the boat lands at the shore, a dozen villagers rush over shaking their heads and hands. I pull on my sticky shirt, loosening it from my chest before I jump out. I shouldn’t be here, but I play the whole dumb tourist thing again, and hope they buy it like the last village did…

And… read the winner of last week’s prompt reply: Rebecca Henry of Alaska.

The bench looked deceivingly inconspicuous, like if you sat on it, you could enjoy your brown paper bag lunch, watching pigeons in the park, without any life altering events…

But it can be these simple things that can be deceiving; where no one would expect to find their worst nightmare.