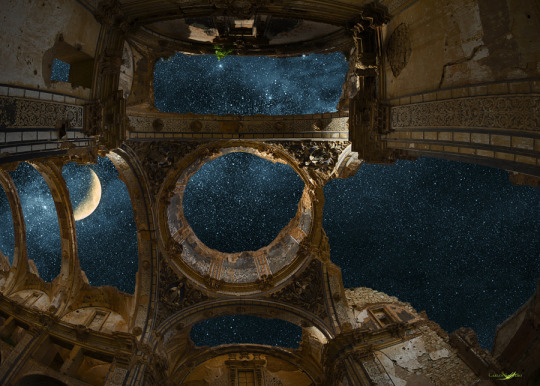 I wake in the middle of the night camped in more ruins. The sky is sprinkled with a host of stars. A fire burns next to me. I’m not scared. I should be, but on the contrary, I wish I could stay. But after last night…

The only thing to fear is fear itself, a voice says in my head. I can’t remember who said that but it’s not important. What’s important is how to survive another night. I can’t fail again.

The fire sputters out, I sit upright and look around. The stars slowly blink out, one by one. It’s happening again.

I quickly rummage through my backpack, trying to find my flashlight before it goes completely dark. The final star twinkles away leaving me to the blackness. Darkness so thick you can feel it. I’m scared of the dark, I remember. Not the dark—the things that hide in it.

I feel the metal body of my flashlight and with trembling fingers turn it on. I sweep the light around my campsite, nothing. I’m alone.

I hear laughter to my right. Long and crisp, the sound of insanity. I whip my flashlight towards the noise, but the light has dimed, it’s only shining a few feet in front of me now. I hear footsteps behind me. Nothing to fear, but fear itself.

I slowly reach into my backpack and pull out a long thin knife. I stand up and take a deep breath.

“I’m not afraid of you,” I say, it sounded much braver in my head, but not when my voice is trembling.

Something snickers behind me, something like a hyena. I turn in a circle. My flashlight’s light growing dimmer and dimmer. The footsteps are getting closer and closer, but always out of sight.

“Show yourself,” I croak.

My flashlight blinks, and then goes out. Complete and utter darkness. I try not to cry. Nothing to fear but fear itself, keeps repeating in my head, but I am scared. I hear the laughter to my right, no, my left now, and a new sound. A soft scrapping noise, like, like the gnashing of teeth. I drop my dead flashlight, clutching the knife with both hands.

Something laughs a few feet in front of me, “little girlie gots her knife. Little girlie’s so big now,” a wolfish voice says before cackling again.

“Little girlie will never pass her tests, now will she? She’s to afraid, oh boo-hoo!” I hear something slicing through the air, but step aside too late. Claws cut through my cheek.

I jump back, my knife pointing in front of me, but it could be anywhere now.

“You’ll never beat me now, girlie. You think you can pass after you failed the first night?” the thing snorts behind me.

I take a deep breath and face towards the voice. Nothing to fear…

“I kill you again! Likes I did last night!” it screeches. I hear footsteps running towards me.

My knife whistles through the air then, thud. I hear laughter. Did I miss? Then gurgling. The lights come on and I see my knife in a cloth dummy. I feel a hand on my shoulder and a soft voice says, “Well done, Alice, you passed.”

I wake in the middle of the night camped in more ruins. The sky is sprinkled with a host of stars. A fire burns next to me. I’m not scared. I should be, but on the contrary, I wish I could stay. But after last night… pretty much everything has changed. I sigh. I really wish I could stay. Well, maybe not here. Maybe in my own bed with the big skylight that provides the same view of the glorious skies. That would be more comfortable.

Ok, maybe that wouldn’t be more comfortable. I sit up and rub my eyes, trying to clear my thoughts. That would mean endless days and long evenings of lectures on everything from history to geography to law; of listening to the complaints of citizens wronged by each other, and making restitution for said complaints; of hosting foreign dignitaries and practicing negotiation skills with said dignitaries…. and much, much more. All in preparation of taking over the throne now that my cousin- the heir – died last night in a horse-riding accident.

Six of us cousins had been enjoying a night’s romp in the ruins some couple of hours’ ride from home. The ruins were down-right mysterious, no matter how many times our teachers had pounded dull warnings from history into our heads. We just made up our own stories that captured the soul of the place. And whenever we had were given a free evening – which was increasingly rare – we pound out here as fast as we could to keep on exploring and keep on storytelling.

The crown prince was the best of us at storytelling. I think that’s why we let him come. Other than his oratory skills, I don’t think any of us will miss him. He was an arrogant ass. But having him gone is decidedly worse since I decidedly don’t want to be crown princess. That will be much more uncomfortable than sleeping 1,000 nights on the hard grounds of the ruins. And that’s what I will do if that’s what it takes to get me away and keep me free.
I told you that I should be scared. I’m leaving–that’s what I’m doing. I raced ahead, not with the news of his death, like I said I would, but to the river to where I could backtrack without leaving a trail. I’ve circled back into the ruins behind my cousins, travelling the rest of the night and day into the evening. It is night again, now. I feel safe with my mare grazing beside me, the fire warming me, the cool of the breeze caressing me. But we need to keep moving, I know. I know. Or the search crew will find us and take me home to a life that will leave me hollowed out on the insides, just like these ruins.

I wake in the middle of the night camped in more ruins. The sky is sprinkled with a host of stars. A fire burns next to me. I’m not scared. I should be, but on the contrary, I wish I could stay. But after last night… fear just seemed to be obsolete and outworldy to me. So I guess being out here, in the middle of nowhere, gave me a sense of humanity that I had lost in the last few days. I’ve always loved stars.
Jack shifted beside me and rolled over, releasing a slight snore and twitching his nose, a sleeping habit he developed.
It’s good that he’s able to sleep peacefully with what’s been going on the last couple of weeks. The running and shooting had become almost normal during the months Jack and I had come in contact.
“The stars look really pretty tonight,” I whispered while resting my hand on top of Jack’s head.
A distant siren and bright light brought me out of my stupor. As well as the bullet that hit the ground next to my left leg.
A few choice curse words left my lips as I shot to my feet, a couple more bullets wizzing by my head.
Jack yelped and jumped to his feet dashing off into the forest across the field.
“GO JACKABOY!” I shouted gleefully and ran after him, having no idea why this was fun. I’m an adrenaline junkie.
I dove into the trees and slid down next to Jack, pulling him close to me in hopes his breathing will slow down.
“I won’t let them take you,” I whispered comfortingly as I traced the large scar on his side.
Jack whimpered and nudged me appreciatively, tongue hanging out of his mouth. Oh yeah, forgot to mention, Jack’s my german shepherd.

I wake in the middle of the night camped in more ruins. The sky is sprinkled with a host of stars. A fire burns next to me. I’m not scared. I should be, but on the contrary, I wish I could stay. But after last night’s earthquake, there is not even a brick standing that I can call home. I want to stay because this ruin is the place where my last moments of safety took place. I want to stay because, although there is a fire, it is the only thing that is colored and alive. The ruins and the rubbles are colorless, but they are still mine. I have decided. I am not leaving.

It took more than a moment of consciousness for me to realize that I need to check my own physical condition. I feel my arms, then my left leg, and lastly my right leg. Although they are all there, the right leg is trapped under a concrete slab. I’m not scared. I should be, but on the contrary, I wish I could stay. Rather than calling the condition of my right leg-trapped, my right leg is well anchored. I have decided. I am not leaving.

Other than the ruins and the rubble from destroyed houses, I see people. I cannot see their full bodies; the only visible part of their bodies are tinted with a thick layer of ash. I’m not scared. I should be, but on the contrary, I wish I can stay. They look so lonely and choosing to stay with them is the little that I can do for them and remember– I am anchored. I have decided. I am not leaving.

I wake in the middle of the night camped in more ruins. The sky is sprinkled with a host of stars. A fire burns next to me. I’m not scared. I should be, but on the contrary, I wish I could stay. But after last night… if I pause long enough to let myself connect, I can hear the stars singing. It’s not a happy song of endless wonder and things to be discovered; but a groaning melody.

For generations people chanted: “Save the earth, protect the planet.” But who is chanting, “save the stars?” There’s so many of them that even the voices of the conscious have hardly been raised. It’s as if we discovered that the earth was in fact a paper plate, one of millions—there at our disposal.

I shake my head, pulling myself back to the present. This is no longer discovery and research, it’s mere cataloging. It seems that even though we’ve only been touching the stars for four generations we’ve managed to wreak havoc on countless planets.

It’s always the middle of the night here, in a solar system not centered around a sun-star. I sigh, shake my head and prepare to make my next jump. As much as I love exploring places that mean destruction to others, I’m growing weary of the fact that there are in fact, more. When I started out as a space historian, probing the galaxies for places of desolation clearly caused by humans, I thought that I that I would spend most of my time in dead space, following leads. Clearly I was wrong.

2 thoughts on “Prompt Reply: The Ruins”