Pen Friends, we are so excited to introduce you to debut YA author, S.D. Grimm! She’s someone you should definitely get to know (and her novel launches next week)! Plus, there’s a GIVEAWAY — check it out below.

SP: Welcome, S.D.! Can you tell us a bit about yourself and when you started writing?

I write young adult sci-fi and fantasy because I love it. I started writing when I was in elementary school–second grade. It was a story about a lost sock. Only my lost sock was a living being who had been separated from his mother and siblings. Seven years ago I started writing with the hope of being published. And that book? Scarlet Moon.

SP: I know you were a Pitch Wars mentee (like our own Nova McBee is this year). What was the contest experience like? Would you recommend it for up and coming writers?

Pitch Wars was an awesome experience. I highly recommend it. Not only did I have a fabulous mentor, who taught me a lot, but I got my novel ready for pitching, and the edits my mentor suggested led to a polished novel that eventually helped me land my amazing agent. In addition to that, I have a community of friends who went through the same process, and they are so amazing. I would say that community of writers alone is invaluable.

SP: What has your journey to finding an agent and the road to publication been like?

Crazy. Remember that movie Tangled, when Rapunzel (spoiler alert) leaves the tower for the first time and she’s so torn between that decision being both the best and worst of her life? It’s been like that. I love it. I hate it. Rinse. Repeat.

SP: Congratulations on the upcoming release of your debut novel, Scarlet Moon (Children of the Blood Moon: Book One)! How did you get the idea for this series? Will you share about its premise?

So I got the idea from a scene that played in my head while feeding my baby boy. That scene does not appear until Book Three, and it doesn’t even involve the main characters. But that’s how it was born. This very real scene and these very real characters. I just had to know their story. What they were fighting about. And why these other characters were so crucial.

The premise for the book in my practiced elevator pitch: 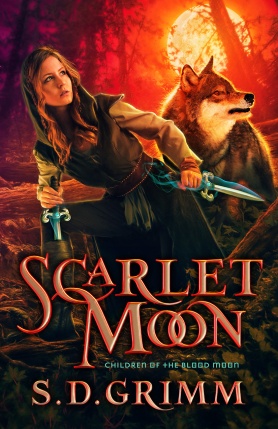 The hunted race of Feravolk are counting on Jayden, a seventeen-year-old, dagger-wielding, storm-detecting orphan to save their race. Maybe they should have thought of that before they killed her family.

SP: Fantastic! If you could list a few things that inspire your writing what would they be?

I get inspired by relationships. My stories tend to be character driven, and I think it’s because I love characters and specifically relationships. I don’t mean only romantic ones, but those certainly make the list. I also love the dynamic between siblings and friends and mentors/mentees. I think there are so many unspoken variables when people who know each other communicate, and that fascinates me. So often I get an idea for a story based on a plot, but the character dynamics are what really gives me the full story idea.

SP: What’s something we wouldn’t know about you just by looking? i.e., tattoos, a dream, your secret identity…?

Hahaha! Okay, so my secret wrestler name might be Rumbelina. But what else do you call a 4’11” shy wallflower who loves Brazilian jiu jitsu and kickboxing?

SP: I’d call her awesome! I also wouldn’t want to get on Rumbelina’s bad side. Okay, here are a couple random questions: Favorite drink while writing?

I’m gonna have to go with water. It’s awesome.

SP: A word of advice for new writers?

SP: And finally, where can we learn more about you and your book?

And you can totally come to this Facebook party and try to win a copy. Plus there will be two other authors giving away stuff there. 😀 https://www.facebook.com/events/183601465406699/

Thanks again for joining us, S.D., and good luck on your book launch! We are so excited to read this series.

Bio: S.D. Grimm’s first love in writing is young adult speculative fiction—everything from urban fantasy to epic fantasy and space operas to superheroes. She is represented by Julie Gwinn of the Seymour Agency, and her debut novel, Scarlet Moon, releases October 2016 through Enclave Publishing (an imprint of Gilead Publishing). Her office is anywhere she can curl up with her laptop and at least one large-sized dog. When she’s not writing or freelance editing, Sarah enjoys reading, kickboxing and Brazilian jiu jitsu, fencing, and Netflix bingeing. You can learn more about her and her upcoming books at www.sdgrimm.com.

*Giveaway! S.D. has a signed copy of Scarlet Moon up for grabs! All you have to do is sign up for her newsletter by clicking here, then come back and tell us in the comments that you signed up–you have until 9am EST on Friday, October 21st. S.D. will announce the winner here in the comments next Friday!