Pen Friends ~ We couldn’t be more excited to introduce to you two young twin authors, Sarena and Sasha Nanua, who have been wildly successful in their pursuit of writing, book blogging, publishing, and much more. (See below!) 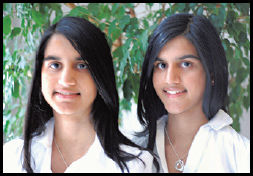 SP: Hi Sarena and Sasha! Thanks for being with us. Can you start out by telling us a bit of who you are and when you started writing?

Sure! First off—thanks for having us! We’re super excited to be here! To start, we’re Sarena and Sasha Nanua, twin authors, book bloggers, and, of course, voracious readers. We began writing when we were nine years old, when we were super bored on an airplane and thought, Hey, why don’t we write a book? We finished the first book the following year and began writing in lots of journals, but never really finished another book until we were fourteen. We decided to self-publish our book, The Gemstone, when we were fifteen, and the subsequent novels in the series came out when we were sixteen and seventeen. Since then, we’ve written and revised two novels and are very excited to see where they head in the future!

SP: Ok, you two are amazing book bloggers and social media gurus! You’ve seriously got a gift! So tell us, how have books and talking about them changed you?

Haha, thank you! Social media has played a huge role in our lives over the past few years. When we were young we never thought we’d get Facebook or Twitter; then we wrote The Gemstone and were readying it to be published, and realized—social media is important! Especially for YA authors trying to reach their audience. It started out as a marketing tool and turned into something so much more—we became book reviewers, a part of the blogging community, and bookstagrammers. It’s all so much fun and has seriously changed the way we view the book world! We can’t imagine not talking to fellow book lovers online, who have turned into real-life friends we’ve met in-person!

SP: You started young. How did your parents view your writing? Were they supportive?

Definitely. Our mom helped us out a lot when it came to self-pubbing, since we were so young. We’ve learned a lot about the industry over the past few years and have gotten much more involved, so our parents see how much writing means to us and how we want to make a career out of it.

SP: What is your biggest distraction while writing and how do you combat it?

Hmmm … social media? As much as we love it, it’s so strange how being on Twitter and blogging can sometimes be a big time-suck. Sometimes we need to turn all that off and just write for the night. Preferably with music (sometimes without) or with the Food Network on in the background, muted.

SP: You both are big supporters of “We Need Diverse Books,” right? So what does this mean to you and how has it influenced you?

We love WNDB. We actually started thinking about writing our first book with an Indian main character right around when WNDB was starting, and we hadn’t known about it back then. Then, around the time we were writing the book, and then querying and pitching it, the community surrounding diverse books exploded, and hashtags like #ownvoices became so integral. We love organizations like We Need Diverse Books and want to support them as much as possible. It’s so important that kids, whether teens or younger, see themselves in books. We were teens not too long ago ourselves!

SP: Favorite snack or drink while writing? And one more fact about yourself that we wouldn’t know by looking at you?

Sarena: If it’s cold outside, a nice hot chocolate. Otherwise, I need water to keep me hydrated! As for a fun fact, purple is my favourite colour because the main character in my fave book series as a kid (Amazing Days of Abby Hayes) loves purple.

Sasha: I love Goldfish. If I’m writing, I can eat a whole bag. They’re so good! A fun fact about me is that I have a pacemaker. I’ve lived with a heart condition my whole life, and because of it, my family and I started an online charity auction called Shop @ Your Own Pace on Facebook!

SP: So, let’s talk about The Pendant Trilogy. How did this idea come about? How was your journey publishing it?

The Pendant Trilogy first came about when we were thirteen. Sarena had just recently started reading The Summoning by Kelley Armstrong. On the cover, there’s a girl holding a ruby; Sarena began to think about what it’d be like if a gemstone held magical powers. And voila, the idea for The Gemstone was born! We wrote it from 2010-2011, and published it in May 2012. We decided to self-publish as teens, and have learned so much from the writing community and blogging community ever since! Publishing got the ball rolling for our Twitter and blog, and eventually, our bookstagram and all the books we’ve written since self-pubbing. The most exciting thing about having books is definitely talking to other kids about them when we do school visits or workshops!

SP: Any secrets on writing tips or habits, editing and publishing with our teen and adults writers?

I don’t think we have any secret tips—just write! You don’t have to write every day (in fact, you might burn yourself out if you do!) but we find working in bursts of time, like during writing sprints with friends, helps us up our word count. So find your people, write, write, write, and you’ll get there! We promise!

SP: You are twin writers now. Do you always see yourselves writing together? Or will you one day write separately?

We always write our books together; it’s just something we’ve done since we co-wrote our first novel. Separately, we write short stories (for class or outside contests), a few of which we’ve gotten published in anthologies. But yes—we see ourselves continuing to write books together!

SP: Can you tell us one thing you learned from winning Pitchwars 2016/or other contests?

Being a part of PitchWars was a dream. The community of writers we found from it was the biggest thing we gained: friends. People who want to do writing sprints, chat with us, support our writing even if they’ve never met us in real life. Those people are so important. And everyone we’ve ever met from other contests, like #DVPit, PitchSlam, etc—they are like our writer family, too! We’ve learned a lot about pitching and editing and all that, but I think the most important thing we gained from every contest we’ve been in is the relationships we formed with fellow writers.

SP: A little bird told me there is very good news in the works… Where can we follow you to hear your announcement? And where can we learn more about you and your books?

Our website: sarenasashabooks.com and our blog: http://www.thependanttrilogy.wordpress.com. And you can always tweet us @PendantTrilogy! We love to hear from readers and writers. ❤

SP: Thanks again, ladies! We’re excited to have you on the SP.  We wish you all the success with more books, publishing, and adventures!