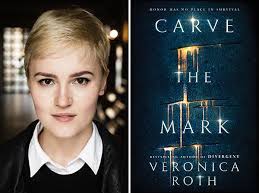 On a planet where violence and vengeance rule, in a galaxy where some are favored by fate, everyone develops a currentgift, a unique power meant to shape the future. While most benefit from their currentgifts, Akos and Cyra do not—their gifts make them vulnerable to others’ control. Can they reclaim their gifts, their fates, and their lives, and reset the balance of power in this world?

Cyra is the sister of the brutal tyrant who rules the Shotet people. Cyra’s currentgift gives her pain and power—something her brother exploits, using her to torture his enemies. But Cyra is much more than just a blade in her brother’s hand: she is resilient, quick on her feet, and smarter than he knows.

Akos is from the peace-loving nation of Thuvhe, and his loyalty to his family is limitless. Though protected by his unusual currentgift, once Akos and his brother are captured by enemy Shotet soldiers, Akos is desperate to get his brother out alive—no matter what the cost. When Akos is thrust into Cyra’s world, the enmity between their countries and families seems insurmountable. They must decide to help each other to survive—or to destroy one another.

Four reasons I think people picked up this book: Promises of Star Wars undertones. Romeo and Juliet vibes. Descriptions of planets similar to those in Interstellar. Anticipation of Roth’s new book.

There was a lot of controversy surrounding this book, and I will not get into that at all. I will only review the story as a writer and a reader. First, Roth’s world building was well done, (although I was confused as to why they used modern English swear words. Huh?) Her development of the current gifts and their uses were interesting, both in moments when Akos would touch Cyra (So much relief!) or when Akos touched the bad guy (ouch!) or when Cyra was used in a way she didn’t want to be used (hard life). Her world and their gifts created more tension and conflict in both relationships and plot, which was great. Needless to say, these gifts created fodder for thought.

This story wasn’t as pacey as I thought it might be. It was a slow and steady read, but it never lost my interest. The depth of intense family dynamics between brother and sister, people groups and nations, resistance and loyalty, and love were easy to sympathize with and Roth upped the stakes with hard choices.

The ending was good, but a bit unexpected and not planted as well as it could have been. However, the twist allowed the possibility of a sequel, so I’m sure many readers will be thrilled.

*I was surprised by the controversy surrounding this fictional book. I never felt it all while reading, nor have I felt it from the author herself who seems to be as accepting and as empathetic as they come.