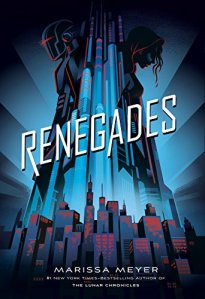 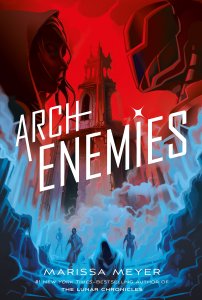 I know, I know; The Lunar Chronicles should probably be talked about first when it comes to Marissa Meyer’s books, but that series would need a whole set of posts to cover (which I am tempted to do!) But I got to attend an author event for Archenemies last month while she was on tour promoting it, so we’re taking tips from that talk instead!

First off, I must mention Archenemies, the 2nd book of the Renegades trilogy. How does her second series hold up to the first (The Lunar Chronicles)?

It’s just as compelling a read; there’s no pausing to do laundry or to eat a meal (unless someone else sets it in front of you). All of her books have seen me dropping all responsibilities (including sleep!) once I crack the cover, up until I finish the last page.

That’s the highest recommendation a book can get from me, since most books don’t take more than 3-4 hours to read[i].  And her books have all the good stuff: deep and interesting characters, a compelling story and plot, high stakes, fast-paced action (well-written fight scenes!) and enough mystery to keep you reading until you’ve got (some of) the answers!

So what was she sharing about on her tour?

She started with FAQs – the most frequently asked questions her fans pepper her with all the time. Since a large portion of the event was crowd questions, I appreciated her pre-planning, to save us from hearing various iterations of the same question later on. She had answers to those FAQs, and also interesting side stories that might not have come to mind if she’d been answering off the cuff.

So there’s the first tip you can take away as a writer:

These are good to note not only for your readers, but for yourself! Those days when you’re bogged down in trying to get through a transition, or just doing research on some fact your story has to have for it to make sense, pull out your list and remember why you’re slogging through science articles, or looking up weird animal facts, or checking when people first started using bow and arrows.

Marissa has a lot of young fans, and a lot are aspiring novelists. Her advice was to keep writing, and while that is almost always the advice authors give young writers, it had weight when she said it, because she…

Put in the work.

When I was a teenager, I signed up to get email newsletters from an aspiring novelist. They included writing advice, a little snippet (a very short story), and updates on what her writing projects. One of them included an announcement after Nanowrimo: she’d been working on a set of stories based around fairy tales and was going to pursue publishing them! Since I already loved her stories[ii], I was excited to hear more about it as she wrote them… and then I went to college and forgot about her.

Around a decade later, while living overseas, my personal librarian (my mom) was enthusing about a new book coming out called Cinder. It wasn’t until she started talking about the author that it clicked: Marissa Meyer was that long-ago writer, and her book had been published! Notice that it was at least a decade since I’d heard her talk about the series she wanted to write before I heard about the book coming out. That’s putting in some serious time to get your story written, re-written, edited, accepted by an agent, accepted by a publishing company, etc. …

I’m not saying it’s going to take everyone a decade to get published, but if you’re throwing in the towel after a month or two of writing, you may need to re-think how much dedication you have to your story and your characters!

Marissa Meyer was ahead of her time in gathering a fan base before she was published, but today that’s almost expected if you even want to get published. I doubt she started sending out simple emails to people like me in an effort to create her platform, but it gave her experience to go on when that became the market of publishing.

Even if you’re writing simple stories, or practicing writing individual scenes, you should put your work out there – and try to use the criticism that comes your way to improve your writing. I’m not saying to take anyone’s word as better than your own opinion, but if there’s something useful in what they’ve said, take it and let yourself grow!

And in saying that, I’m logging off to get back to writing my own stories!

[i] My only superpower: speed reading.

[ii] Sailor Moon fanfiction. I can’t count the hours of fanfiction I have read and written. Probably every story I will ever write will be influenced in some way by Sailor Moon.

2 thoughts on “Marissa Meyer, the Renegades Series Tour, & Tips for the Writer”