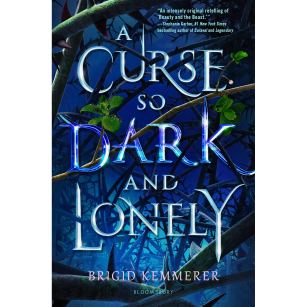 Title: A Curse So Dark and Lonely

Fall in love, break the curse.

It once seemed so easy to Prince Rhen, the heir to Emberfall. Cursed by a powerful enchantress to repeat the autumn of his eighteenth year over and over, he knew he could be saved if a girl fell for him. But that was before he learned that at the end of each autumn, he would turn into a vicious beast hell-bent on destruction. That was before he destroyed his castle, his family, and every last shred of hope.

Nothing has ever been easy for Harper. With her father long gone, her mother dying, and her brother barely holding their family together while constantly underestimating her because of her cerebral palsy, she learned to be tough enough to survive. But when she tries to save someone else on the streets of Washington, DC, she’s instead somehow sucked into Rhen’s cursed world.

Break the curse, save the kingdom.

A prince? A monster? A curse? Harper doesn’t know where she is or what to believe. But as she spends time with Rhen in this enchanted land, she begins to understand what’s at stake. And as Rhen realizes Harper is not just another girl to charm, his hope comes flooding back. But powerful forces are standing against Emberfall . . . and it will take more than a broken curse to save Harper, Rhen, and his people from utter ruin.

Review:  A Curse So Dark and Lonely

Admittedly, I am a sucker for a good Beauty and the Beast retelling…but this was above what I expected. Such an amazing twist of events, and unique spin on this old, and retold, tale. It kept so many of the elements of the regional story, but almost created a new tale altogether. Her characters were nothing like what I have read before in this kind of tale, and the brutality and honesty, the beauty and pain, the achievements and conclusions left me breathless.

Characters/Voice: At first I was worried that the main characters, Rhen and Harper, would fall into a common YA mold, but I was was pleasantly surprised. They played this new role in this new story very well. Harper was not too overly strong and leading the way, and the boy was not too overwhelmingly perfect, always saying the right thing. They surprised me–and that equals awesome. They were each unique, vulnerable, relatable, and made a lot of mistakes that left me guessing! I loved how slowly their relationship developed. Another main character is Gray. I liked him so much, and yet didn’t know how to feel about him at times. And hence my eagerness for book 2!

As for the nemesis, you hate her, so that can tell you something! lol! And most of the side characters were all written in way that made you want to know them.

Setting: The story takes place in two worlds, the contemporary real world (Washington DC) and Emberfall, a fantasy world in a dimension side by side with ours. While DC is DC, Emberfall’s setting draws us into the story right away. It’s a medieval type era with stone castles and houses and horses etc, but the curse and the beast play much more into the setting making it a bit more mysterious. It’s deceivingly inviting, warm and sunny near the castle and cold and snowy and dangerous out of the border of the cursed castle.  The geopolitical history and background make for an interesting part of the story, and I enjoyed watching them travel to and from small towns. She draws a vivid picture of land and culture and creates a really wonderful world. I love the contrast that Brigid makes between the DC/Emberfall and how the voices of the characters clash, making their differences truly shine and work for the story.

Pacing: Overall the pace moved quickly. At first, the pace was steady with almost an alluring & mysterious tiptoeing into the story. It really drew me in, but not in a fast way. Later, once I was in, it became a racing kind of read, one I couldn’t put down.

Plot: Beauty and the Beast while fighting to save a kingdom while wondering what love really is, with multiple unexpected twists.

*I’d recommend this series for older teens and adults.