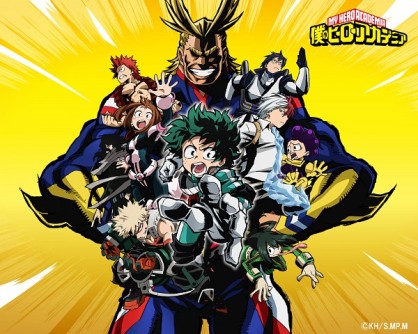 Hold on a moment while I put on my nerd cap, to talk about a fabulous series called My Hero Academia, by Kouhei Horikoshi. For those totally oblivious to anime (and manga – the written comic form of popular Japanese story-telling), My Hero Academia is one of the top hits currently being published and animated for TV. (check Amazon Prime and Hulu)

A short synopsis: Izuku lives in a world where 80% of the population has been born with a Quick – think X-Men, but even zanier. Unfortunately for Izuku, who longs to be a professional hero, he’s Quirk-less, just a normal kid – which isn’t so normal anymore. Just when his dreams are in danger of being crushed by bullies and reality, he has an encounter with the #1 Hero of the age, All Might, and gets the chance to become the next greatest hero himself.

As much as I want to plug the series (go watch it! Now!) I actually want to touch on two characters and two themes, that I see running through Horikoshi’s story.

TRUE TO LIFE: A STORY OF BULLYING

Horikoshi does an unusual thing with Bakugou Katsuki, who often plays a secondary role to our hero. Rather than having Bakugou (the bully) face consequences or even be called out on his behavior, he does well in hero school, manages to make friends, and continues to harass our protagonist. In one of the first scenes of the story, Bakugou tells Izuku to jump off the school (essentially provoking him to commit suicide) without any assurances Izuku wouldn’t do it. His disregard for others is massive – he doesn’t care about anyone’s welfare but his own, and he crushes those he views as threats under his explosive Quirk.

Now in a normal story, an author usually chooses two ways to deal with a bully:

Yet with Bakugou, even after they enter hero school, the teachers never call Bakugou on his behavior, even as he continues to attack and traumatize Izuku and others. It’s an interesting choice – to make a main character so dislike-able, with problematic, unchecked behavior a soon-to-be hero. Yet many victims of bullying in today’s world could probably say the same of their bullies – that they were never called to account for their behavior, that they (somehow) had friends, and that they managed to succeed in life.

Whether Horikoshi meant to parallel real-world bullying or not, it makes for uncomfortable, thought-provoking reading. 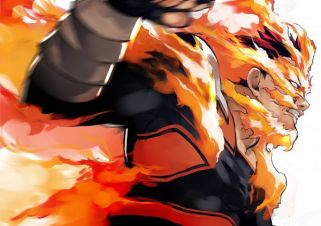 Themes of redemption run pretty strongly throughout My Hero, but none jumped out at me so strangely as Endeavor’s story (which is still unfolding).

As the long-time #2 hero, Endeavor should be a role model and highly principled guy. Instead, his family has been crushed for years under his physical and mental abuse, to the point that his wife now resides in a hospital trying to recover her will to live, and his oldest son’s whereabouts are unknown.

It’s difficult not to dislike Endeavor, and when more of the abuse is revealed to readers over time, most assume that at some point these secrets will come to light, and Endeavor will be stripped of his hero status. Yet none of this seems likely to happen, and the direction of Hirokoshi’s story seems to imply that reconciliation and second chances are more likely..

If it seems unusual for a story about heroes to include an abuser never facing his crimes, it is. Most authors would hate to have such an unbalanced story, without the relief of some kind of catharsis for his victims, especially his youngest son, a hero-in-training himself. And there isn’t just one chance for Endeavor to make amends – there are many. Yet it is not Endeavor who extends a hand in remorse or contrition – it is his wife and daughter who attempt reconciliation, pulling his sons in with less success. Very odd, very unusual.

These are just two of the bold choices I feel Hirokoshi has made with his first successful story, and yet there are many more to touch on.

What unlikely themes have you seen recently in your reading? What is something you want to do differently with your story telling? Have overdone tropes or cliches pushed you to write something opposite the current style? Let us know in the comments!