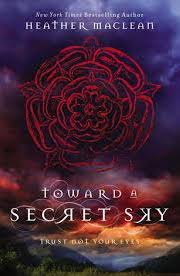 Title: Toward a Secret Sky

Publisher: BLINK Harper Collins (This book is NEW. It was released April 4th!)

Shortly after 17-year-old Maren Hamilton is orphaned and sent to live with grandparents she’s never met in Scotland, she receives an encrypted journal from her dead mother that makes her and everyone around her a target. It confirms that her parents were employed by a secret, international organization that’s now intent on recruiting her. As Maren works to unravel the clues left behind by her mother, a murderous madness sweeps through the local population, terrorizing her small town. Maren must decide if she’ll continue her parents’ fight or stay behind to save her friends.

With the help of Gavin, an otherworldly mercenary she’s not supposed to fall in love with, and Graham, a charming aristocrat who is entranced with her, Maren races against the clock and around the country from palatial estates with twisted labyrinths to famous cathedrals with booby-trapped subterranean crypts to stay ahead of the enemy and find a cure. Along the way, she discovers the great truth of love: that laying down your life for another isn’t as hard as watching them sacrifice everything for you

If you like books like Thief of Lies by Brenda Drake then you will love Toward a Secret Sky. It had so many of the same vibes (and even a character named Gia!) Supernatural – human partnerships, different realms colliding, darkness and light battling, a uniquely gifted girl protagonist thrown into her destiny, and super hot mysterious boys running around with weapons. What’s not to like?

As a writer, I particularly liked the opening chapter. It roped me in with mystery, voice, plot, and premise. Kudos there. For the rest of the story, the pace remained steady.

The story, being paranormal, had some twists I wasn’t expecting but it was done well. It also dealt with a few dark issues like grief (expected) and date rape (unexpected). There was a bit of the instalove romance between Maren and Gavin, (the two protagonists) considering how many times they had met, but honestly, if I met Gavin, I’m pretty sure the same thing might have happened!

As for setting, Heather Maclean, having married a Scotsman, really does culture well. I really enjoyed the Scottish atmosphere, UK accents, and trips to London. Made me want to hop on a plane to Edinburgh!

All in all, it was a fun, clean read, lovely descriptions, and I think teens everywhere will adore it.