Pen Friends~ I’m so excited to introduce you to Young Adult Author, Natalie Mae, who will talk about her upcoming book, The Kinder Poison, out in just ONE WEEK, from Razorbill. 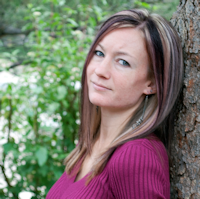 SP: Hi Natalie! Thanks for joining us! Before we start talking about your debut, The Kinder Poison, we’d LOVE to know a bit about you and your writing journey?

NM: Thanks so much for having me! I’m a Colorado author who graduated with an

Information Technology degree from CU Boulder, because I didn’t think writing books could be an actual job. (I guess I thought authors just “existed” out there? Like stars?) Very happy to say that I soon found out anyone could pursue authorship, and the rest is history! It’s taken about 8 years to get where I am now. It took me 2 of those years to get an agent, and though we sold my debut (a YA sci-fi) within months, it would be another 4 years before I sold The Kinder Poison. And another 2 1/2 years from then until it would publish! So it’s definitely felt like a long journey, but I’m so grateful to be published at all and to be able to write for a living.

SP: The Kinder Poison will come out with Razorbill next week!

Zahru has long dreamed of leaving the kingdom of Orkena and having the kinds of adventures she’s only ever heard about in stories. But as a lowly Whisperer, her power to commune with animals means that her place is serving in the royal stables until the day her magic runs dry.

All that changes when the ailing ruler invokes the Crossing. A death-defying race across the desert, in which the first of his heirs to finish–and take the life of a human sacrifice at the journey’s end–will ascend to the throne. With all of the kingdom abuzz, Zahru leaps at the chance to change her fate if just for a night by sneaking into the palace for a taste of the revelry. But the minor indiscretion turns into a deadly mistake when she gets caught up in a feud between the heirs and is forced to become the Crossing’s human sacrifice.

Now Zahru’s only hope for survival hinges on the impossible: somehow figuring out how to overcome the most dangerous people in the world.

SP: How long did it take you to write The Kinder Poison and how did this story come about?

NM: Oh man, I think it took me around 4 months to write the first draft, though the idea had been in my head for years before then. Add 3-4 months for revisions with my agent to get the book ready for publishers, plus another 5-6 months on edits after we sold it, so that brings us to about 14 months of straight writing? Space that out over 3 years, and that’s how long I’ve been tinkering with this story.

As to where the idea came from, I got it from an article I read about archaeologists finding the bones of children on a mountain, who were clearly ritual sacrifices, but who didn’t appear to have suffered or struggled in any way. That got me thinking about what it would be like to live in a time when sacrifice was accepted and/or revered, and for what reasons someone might do it. From there I started thinking about rites of passage for a ruler, which spanned into a contest this ruler would have to complete to prove their worth, which expanded into multiple heirs having to compete for a crown, which means they’d have to race … and thus I had the seed for The Kinder Poison. But from the start, I always knew it was the human sacrifice whose story I wanted to tell.

SP: Are there any characters that surprised you along the way? What was your favorite part about writing this book?

NM: It’s probably Jet who grew and surprised me the most over subsequent revisions. At the risk of minor spoilers, I’ll say I tend to favor villain love interests in books, just because I feel they challenge the main character in more thought-provoking ways, so in early drafts, Jet had almost a minor role in comparison. But as I fleshed him out with the help of my brilliant editors … I started to fall for him. I started to see how he and Zahru could really grow together, which shifted things over in unexpected ways, but I love how their relationship turned out!

As far as my favorite part of writing the book, I’d have to say Zahru is just a fun narrator to write in general. She says whatever’s on her mind whether it’s appropriate or not (and sometimes regrets it later), she’s compassionate and loyal and quietly strong, and she loves chocolate and lets me tell jokes, so we get along pretty well.

SP: Querying & Agents–What was your journey like before you signed with your agent?

NM: I want to say that before I signed my agent, I was an anxious ball of energy who just wanted so badly for someone to believe in her and champion her work, but I’m still an anxious ball of energy, so I think this is just how I am. When I first started looking into publication, I really thought I would just write a book, edit it for grammar, snag an agent within a month, and have a book on shelves the next year. Surprise – it doesn’t work like that! I had a lot to learn, but I met some amazing fellow writers who I’m still connected with today, and went to some great writing conferences, only a few of which I totally embarrassed myself at. And most importantly – I kept going.

SP: Where were you when you got the news for an offer on your book and how did you react?

NM: Okay, here’s where I admit that I can remember the exact place I was standing in the parking lot at B.J.’s restaurant when I sold DUPLICITY (my sci-fi debut that came out in 2015 – also, I had fish ‘n chips for lunch), but … I have no actual idea where I was when I got the news for The Kinder Poison. This is possibly because I had a one-year-old to take care of at the time, and so I was missing half my brain, or maybe just because it was the second sale? I don’t know. But I do remember being very, very excited, because we still had a lot of editor interest, and I was praying for an auction (which DID happen), and I also probably cried, because at that point I really thought I would never sell another book.

SP: So great. Now, to lighten things up!

Something always in your fridge? Cheese

Would you rather be a professional: Marine Biologist? Spy? Opera Singer? Brain Surgeon? OR? Spy is standing out to me here, though I’m really not sure I’d be a good one..!

Any recent fictional crushes? Nikolai from KING OF SCARS (I mean, I already loved him before, and this new book just reaffirmed my love)

Favorite childhood book?  THE HEAVENLY HORSE FROM THE OUTERMOST WEST

SP: Thanks so much for sharing with us, Natalie! We are eagerly anticipating your book!

DO NOT FORGET TO ENTER OUR YA BOOK GIVEAWAY happening right now. Find details here. *Win a copy of Dust, a peterman retelling, by Kara Swanson.*

Signing off, Nova, YA author of Calculated, The Never Vows, & The Watersphere Saga.