Pen Friends ~ We are starting a series of posts on tips and how to write each genre- Fantasy, Contemporary, Sci-fi, Action-Adventure, and more. This Month is all about WRITING SCI-FI!

Where do you start when you want to write a science fiction story? Just as with any story, you need to have an idea of your plot, your characters, their world and the struggle they’re going to face. 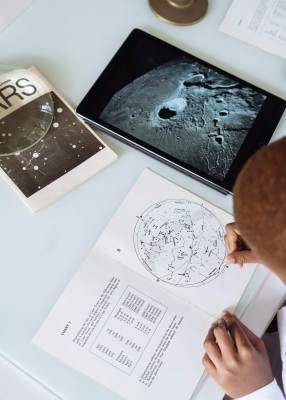 If you begin with a basic plot in mind, how are you going to structure your story? Is it going to be a straightforward and linear, or will you use frequent flashbacks?

You could insert official reports or journal entries to open a window into other perspectives. Or you could even jump around in the timeline – though this is tricky to keep track of – unless there’s a very plot-specific reason for it, I would caution against this.

Or perhaps you like to start with at your characters, and let the majority of the plot evolve with them.

Your protagonist is a brilliant but eccentric scientist, whose narrow-focus makes him difficult to work with, or a space captain whose tragic backstory makes it hard for her open up to her underlings. Maybe an orphan who has been adopted by a space-pirate crew, who grows up to rescue orphans from all over the galaxy. Science fiction, much like fantasy, really doesn’t have limits when it comes to creating your world.

The appearance of your protagonist (and other characters) matters, but not so much as their personality and quirks. The right kind of personality can turn someone beautiful, or make them appealing to others. On the other hand, while a beautiful face or figure can win someone over at first glance, if their personality is rotten, your hero probably won’t make for a good leader. Or perhaps the alien culture you’re interacting with deems superficial beauty as a deception, and immediately attacks.

Do they contribute to society, or are they living outside it? Are they a renegade? Or a seemingly normal cog in the machine of ordered society? There are fun terms people play around with, defining characters as ‘chaotic neutral’ or ‘lawful evil’ – so many variations to consider.

These are fun ideas to explore if you have several alien species, with different cultures and expectations interacting. Don’t just make your (human) characters the smartest, craftiest species without considering WHY they are the smartest or craftiest.

With these new ideas for characters playing around in your head, you want to ask – just how large is the stage of your story ?

Is it set on a foreign world that’s being terraformed?

Or perhaps something along the lines of Star Trek and Cowboy Bebop – a huge galaxy with many inhabited planets and peoples. Do your characters know of these different species and races? Are they just discovering them? Have they had political agreements worked out for centuries?

Just how developed is your “world” – whether that’s the crew on your spaceship or the city they live in? Are there finally flying cars? Is instant teleporting an everyday event?

What is the environment like, if they’re on an inhabited world? Is the food totally different? Or have they transported earth’s vegetation and animals to this “new” land? Are they having success supporting their old way of life?

Raise the Stakes – the Conflict:

As with any story, there has to be conflict. What has gone wrong, or changed, that kicks off your characters taking action?

Are they fighting for peace, setting off a war, discovering new peoples, settling uninhabited planets, or on the brink of a scientific experiment gone wrong?

To my way of thinking, writing science fiction is not so far removed from writing fantasy. Outer space replaces the fantasy world, alien races replace elves and dwarves (or shapeshifters and changelings), and “science” replaces “magic.”

There are so many items from old stories about magic that have been created through science in our time, that it almost seems easier to consider ‘What magical item do I need in my story that the science of the future could produce?’ That’s often how I filter the items I want to make available in my sci-fi story.

There’s also the fact that, like fantasy and magical worlds, it’s very hard not to be influenced by what already exists in written form. This is not something to get discouraged by – you don’t have to ignore Isaac Asimov’s three laws of robotics when you’re writing about artificial intelligence. Just as fantasy is often influenced by Tolkien’s books, whether the writer means to be influenced or not.